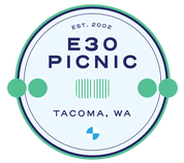 ​Welcome to the official site of the E30 Picnic,
the largest annual gathering of E30s in the World!​
If you're looking for pictures, try #e30picnic on Instagram

​Held during the last weekend in June in Spanaway, Washington, the E30 Picnic sees upwards of 250 E30s from 8-10 states and two Canadian Provinces.  The E30 Picnic is the largest gathering of E30s in the World!  The event has turned into a whole weekend of activities.  A Tech Session at Accuracy Automotive on Saturday afternoon, generally followed by an evening party/get-together, with the traditional E30 Picnic being on Sunday.